Even his name is, you know. Cool. At just 25 years old, French watchmaker Remy Cools is one of the most exciting up-and-coming independent watchmakers right now. Cools first came onto the radar of many when he won the F.P. Journe Young Talent Competition in 2018 with his Mechanica Tempus Pendulette Tourbillon desk clock.

Four years later, he’s just finished delivery of his first series of wristwatches, the Tourbillon Souscription. Even before he pulled his chair up to the watchmaker’s bench, Cools pretty much always knew he would enter the field.

“I’ve wanted to be a watchmaker since I was 11 years old,” Cools says. “One day, my uncle took me to an open house of a Swiss manufacturer in the Vallée de Joux, and when the visit was finished I went home and said to my parents, ‘I want to be a watchmaker.'” Only 11 years old, his parents thought he’d change his mind. But he never did.

By the time he was 15, Cools applied to the prestigious watchmaking school in Morteau, France, just across the border from the heart of Switzerland’s watchmaking industry, La Chaux-de-Fonds.

Soon, Remy Cools graduated from the Lycée Edgar Faure in Morteau, where he rubbed shoulders with a number of other up-and-coming indies – young watchmakers like Cyril Brivet-Naudot and Théo Auffret (the latter of whom also won a prize from the F.P. Journe Young Talent Competition in 2018), both watchmakers we’ve featured here before. Cools, Brivet-Naudot, and Auffret were all pupils of Florent Lecomte, who has also begun to make a name for himself by producing watches under his own mark.

Why We Love It

Let me tell you when I fell in love with Cools as a watchmaker. It was right when he started telling me about the process for making that tourbillon desk clock that won him the attention of F.P. Journe.

See, it began as a school project; students were supposed to start with an old alarm clock movement as the base for their clock. But Cools had a different idea.

“I didn’t want to use the normal alarm clock movement because it was too bad of quality for me,” Cools says. “So I chose to produce the clock in an entirely handmade way. Even my teacher said, ‘So you want to produce all of the components handmade?’ My teacher didn’t understand why I wanted to do it that way. But that’s what I wanted, so that’s what I did. My teacher wasn’t happy about that.”

He relayed the story in a smiling, matter-of-fact manner, as if it were confusing to him how anyone could even conceive of doing things any other way.

Cools said a lot of building his first clock was DIY, teaching himself things that he did not learn in school. The result was a clock that clearly established a recognizable DNA for the young watchmaker.

After completing school in 2018, Cools went to Greubel Forsey, where he worked on the Hand Made 1. The very audacity of this project from the haute horology firm is in its name (an entirely hand-made watch that Gruebel Forsey estimates took about 6,000 hours to complete, running the end buyer about a million dollars). Cools learned a lot at Gruebel Forsey.

“When you graduate school you think you’ve learned a lot,” Cools said. “But when you leave to work in a workshop, you realize how much you still have to learn. In school, you learn watchmaking skills, but you don’t learn how to be independent.”

In 2019, Cools left Greubel Forsey and started his workshop on the shores of Lake Annecy, about 25 miles south of Geneva. For Cools, it felt like the natural next step.

“I was always independent in every sense of the word,” he said. “When I was in my last two years of study, I worked for a Swiss collector to restore his pocket watches and clocks. The day was very long because I’d go to school and then go to the workbench to work on restorations. It was always in my mind to be independent after my studies.”

When formulating the first watch to come from his new workshop, Cools found inspiration in the founding fathers of modern horology.

“For me, the greatest era for watchmaking was the 18th and 19th century in France,” Cools says. “When you look at the work of [Abraham-Louis] Breguet or [Ferdinand] Berthoud, it’s pure and simple. It’s perfectly executed. The finishing is just insane.

“Simply designed is very complicated to do,” he adds.

The result is a beautifully executed time-only watch with a tourbillon at six o’clock that, honestly, kind of looks like a mechanical fried egg.

For Cools, doing a tourbillon in his first wristwatch was an obvious choice. Sure, he’d made a tourbillon wristwatch as his school watch, but more importantly, he just loves the complication.

“It’s the most beautiful complication,” Cools says. “It’s incredible to have the small components turning around on your wrist in the watch movement.”

Even if he’d completed tourbillons in school, Cools noted how much he learned and improved in the process of developing his Souscription Tourbillon.

“Every day I learn,” Cools said. “When you’re alone behind your workbench, you have to work hard to achieve what you want. Everything was a discovery. It was complicated to learn the process of manufacturing, assembling, and setting all of the components, and I learned from all of my mistakes.”

The Souscription Tourbillon is finely finished throughout, with Cools using a number of techniques, including black polish, circular brushing, and sand-blasting. Of all the components, Cools says that manufacturing the wheels is the most difficult. He hand cuts every tooth on each wheel, each of which requires hundred of manipulations on the lathe. To give you an idea of scope, the center wheel alone has 80 teeth. And if you finish cutting the wheel but then mess up the anglage or circular graining? The entire piece is scrapped and it’s back to the beginning.

Instead of a typical crown at three o’clock, Cools uses an interesting winding mechanism on the caseback of the watch. He said he’d remembered seeing this on vintage watches – for example, Jaeger LeCoultres from the 1920s – and his implementation is an evolution of this, using two crowns instead of one (one crown winds the movement, one sets the time).

The Souscription Tourbillon features a 40mm stainless steel case that measures 15.5mm in thickness (much of this from the high, domed sapphire crystal).

Priced at €85,000, all nine pieces of the Remy Cools Tourbillon Souscription have been sold and delivered. Cools says that, in the beginning, it’d take him four or five months to finish each watch, but as he got more efficient it took him one or two months to deliver the last couple.

At only 25 years old and having completed his first Tourbillon Souscription of nine watches, Cools is just getting started.

Right now, Cools says that the most difficult part of being a watchmaker is that he has to concentrate not only on his work at the bench, but also on the commercial, marketing, and administrative aspects of his young business. Today, Cools handles everything – from answering the emails of a pesky HODINKEE editor to anglage and polishing.

“It’s like a restaurant,” he says. “Normally, you have one person cooking the meal, another one handling the sides, a host at the front of house, and so on. When you’re independent, it’s like having one chef handle all of that.”

Despite these challenges, I’m excited to see what Cools cooks up next.

A few days ago, Norqain announced its latest watch, the new Wild ONE. The launch provided the opportunity to present NORTEQ, a new material. The big news with this carbon…

END_OF_DOCUMENT_TOKEN_TO_BE_REPLACED

Seiko is generally the champion of accessible, sporty automatic watches from a major brand with its Seiko 5 collection. The SRPG27 field watch is a perfect example. Citizen is better…

END_OF_DOCUMENT_TOKEN_TO_BE_REPLACED 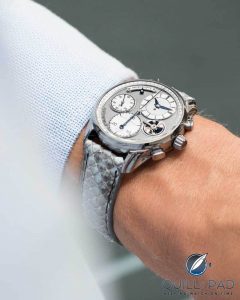 When Tim and Bart Grönefeld showed Ian Skellern their prototype 1941 Grönograaf during Watches & Wonders 2022, he loved it. But he didn’t think it would win “Best Chronograph” 2022…

END_OF_DOCUMENT_TOKEN_TO_BE_REPLACED 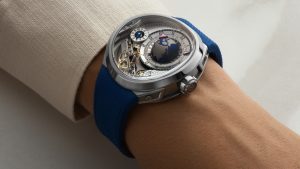 Although boutique haute horlogerie brand Greubel Forsey has built a variety of truly spectacular designs over the years, few elements stand out as vividly from the brand’s lineup as the…

END_OF_DOCUMENT_TOKEN_TO_BE_REPLACED

The Watches TV has a popular series called “Walkthrough” in which Marc André Deschoux and his camera team film as they walk around an artisan’s workshop. In this episode, Deschoux…