Today at the European Space Agency Omega announced a new Speedmaster X-33 model, in the mold of the existing Skywalker design. It is called the Marstimer and was unveiled this morning in conjunction with our friends at Fratello to celebrate 10 years of Speedy Tuesday – the popular social media hashtag movement that has since gone on to spur two limited edition Speedmaster models.

The launch today isn’t a Speedy Tuesday model, but rather the culmination of a new partnership between Omega and ESA that results in a watch fit for the exploration of Mars. The watch features a certain red hue on the bezel to make the connection all the more obvious.

In terms of sizing, the case is the same as the existing Skywalker X-33 at 45mm. The case is made from grade-2 titanium and the piece features a titanium bracelet. The bezel, however, is new. It’s done in a red hematite color, an anodized aluminum coloration that is meant to be reminiscent of the dust on Mars. You can also find this color on the upper left pusher, as well as on a distinct gradient (black to red) on the second hand.

Of course, the main design cue of this one, or any X-33, is the ana-digi (that’s analog and digital) display that allows for myriad functionality that we earth-bound explorers (or couch-sitters) will probably never use. But that’s where this watch, the Marstimer, separates itself from the Skywalker. The force may not be as strong with this one, but it’ll work on the red planet – Mars, not Arrakis.

What does that mean? Well, a day on Mars is approximately 39 minutes and 35 seconds longer than a day on Earth. This new X-33 accounts for that. According to Omega, the new functionality in this watch was developed under an ESA patented license. They include an MTC function (Mars Time Coordinated) to track the Mars date and time at the prime meridian (and thus allowing for the 39-minute difference in day length). It also features a solar compass which allows the user to find true north on both Earth and Mars. These are in addition to the functions which already exist in the Skywalker.

This means that there’s a new movement under the hood to make the multiple Mars time zone and timekeeping capabilities a visual reality. That would be the new Omega 5622 caliber, a thermo-compensated movement tested and qualified by the ESA. Don’t believe us? Just turn the watch over and read the caseback, which has engraved ESA Tested And Qualified.

Manned trips to Mars are not quite on the table yet, but this piece is available now for $6,400.

Well, it’s an X-33 with a red-ish bezel. That was my first thought was upon seeing the watch. And since so much of watch enthusiasm and enjoyment is an aesthetic endeavor, I still kind of feel that way. And that’s mostly because I have no plans to rocket off to Mars any time soon, nor do I have the qualifications to work at ESA or NASA in a control room environment that would necessitate a timepiece capable of tracking Mars time.

That doesn’t mean I don’t think this is a tremendously cool release. Because I very much do. In fact, the ESA involvement in the creation of this idea makes it that much more interesting. If Omega had simply released this piece without any partnership, I think it would feel a bit like a novelty item. Interestingly enough, the first X-33, released in 1998, was known as the “Mars Watch,” and made with the idea of landing on Mars in mind. So this Marstimer isn’t necessarily a new concept, but rather a more specific iteration of the idea.

In fact, what we have is tantamount to an RFP whereby the crew at ESA had a legitimate need and came to the watch company synonymous with space travel to find a solution. It’s no secret that the existing X-33 is the watch of choice for many spacefaring explorers. Its capability is impressive in its own right, with a Mission Elapsed Time function (MET), Phase Elapsed Time (PET) functions, UTC, chronograph, calendar, time and date, and triple alarm functions.

And now, as a result of this new partnership, we get MTC function (Mars Time Coordinated) via the ESA-tested – and brand-new – caliber 5622. This is an update of purpose, and an update that will be put to legitimate use. I can’t help but find that interesting. What’s cooler is that you don’t have to be in space to use this. On the contrary, it would be just as capable in mission control, working on unmanned Mars missions. You have to time that day somehow.

But for every piece of fascination, I can’t help but think that going with the red hematite motif was a bit over the top. Like, real astronauts are going to use this thing and (someday) may wear these on Mars. It seems a bit gimmicky to have a watch with a bezel that matches the colors of that planet’s dust. I’m sure that there are enough people out there who find this design choice neat. It’s just, like, my opinion.

No matter how you slice it, this is yet another step in the story of the Omega Speedmaster, and its connection to space exploration. Let’s all wait and see what adventures are in store for this new Marstimer.

The HODINKEE Shop is an Authorized Retailer of Omega watches; explore our collection here. To learn more about Omega, visit their website. In this episode of aBlogtoWatch Weekly, Rick, Ariel, and David come together to talk about some of the latest new releases and trending stories from the world of watches. To…

END_OF_DOCUMENT_TOKEN_TO_BE_REPLACED

In the ever-growing world of accessible automatic watches, several options offer to you. You can go adventurous, by looking at newcomers, the so-called micro-brands launching collections thanks to crowdfunding. Or you…

END_OF_DOCUMENT_TOKEN_TO_BE_REPLACED 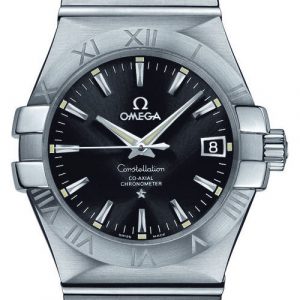 Omega has produced numerous iconic timepieces over the years, including perhaps the world’s most famous chronograph, known around the world as the Omega Moonwatch. Here are five models at accessible…

END_OF_DOCUMENT_TOKEN_TO_BE_REPLACED END_OF_DOCUMENT_TOKEN_TO_BE_REPLACED

Originally founded in 2002, Speake-Marin is celebrating 20 years of watchmaking this year and does so by presenting a special edition of its Ripples watch, aptly named the Ripples Anniversary…

END_OF_DOCUMENT_TOKEN_TO_BE_REPLACED

Creating a product that is truly original and unique is hard. Really hard. Oftentimes a brand will take something that has been done before, whether it’s a proven design or…