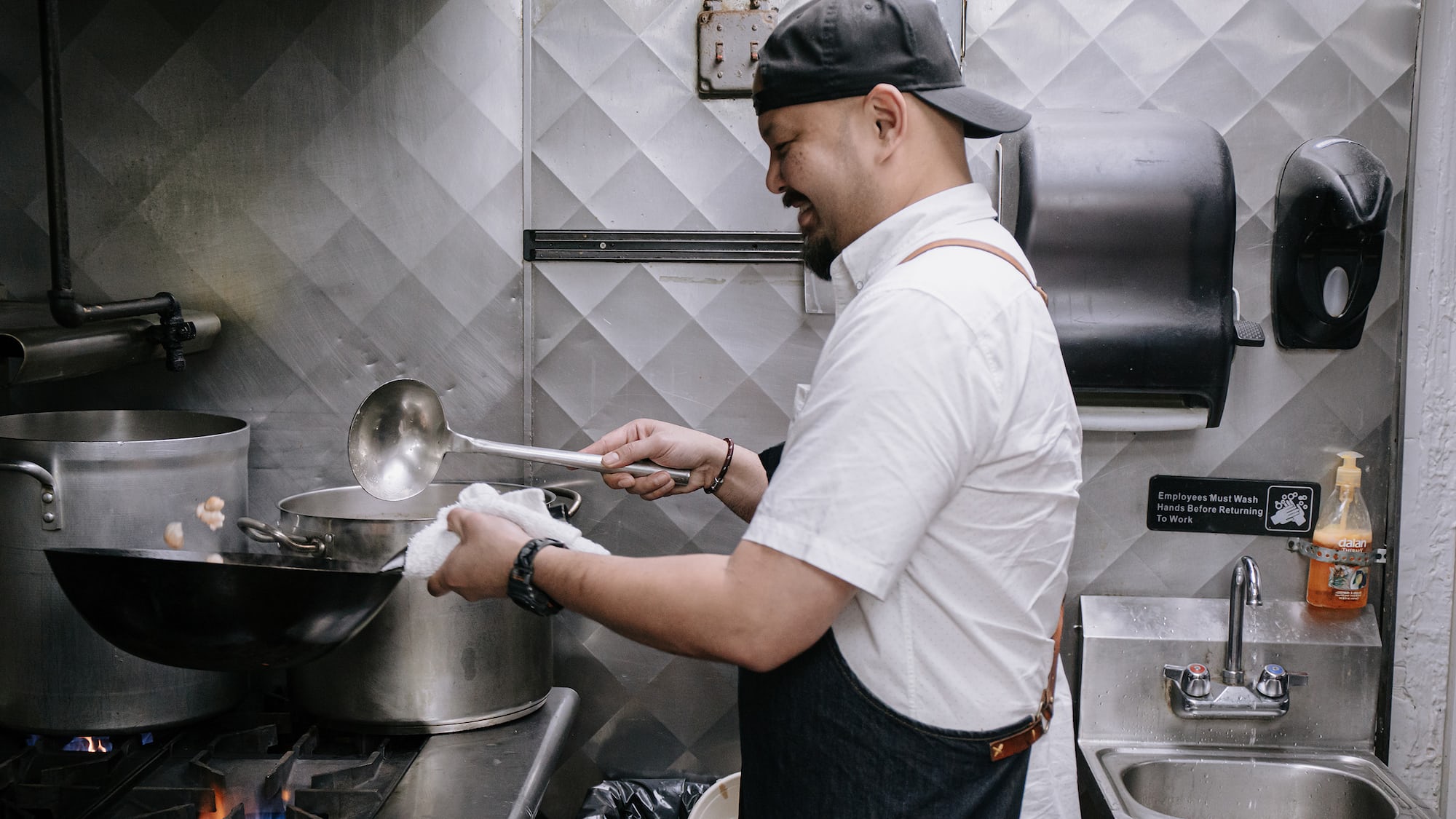 Swing by the restaurant Tradisyon in Manhattan’s Hell’s Kitchen and order absolutely anything. If you see a guy around 40 years old with a goatee and mustache wearing a Yankees hat, looking like he’s having the time of his life serving up Filipino comfort food in paper bowls, that’s Anton Dayrit. He runs the place. Ask him about his watch collection, which includes but is not limited to the four discussed here, as well as more from Tudor, Universal Genéve, and Omega.

“It’s not like I get myself a watch every time I move forward as a chef, or restaurant owner, but I have a tendency,” Dayrit says. For example, about six years ago he was in a shop getting one watch repaired when his eye fell upon a 1970 Hamilton 9988 Chronomatic. “I said, ‘That’s pretty,’ and the guy said, ‘Yeah. It’s only 1,000 bucks.'” So he bought it. Dayrit loves Rolex, but he also loves Hamiltons. Plus, he was opening his second restaurant, so he figured, why not mark it with this piece? “You can’t get reckless with watches,” he says. Well, maybe you can. He tries not to. “You can lose thousands of dollars. But I do like to be spontaneous.”

Dayrit, 42, grew up in the Philippines but has 15 years in New York under his belt. “You want the yellowtail collar?” he asks me. He smiles like I’ve made his day. “Right now, I think that’s the best thing on the menu.” He is comfortable in his skin, a solidly built guy who is light on his feet, moving to the rhythm of steady confidence and, today at least, the dictates of the solar-powered, carbon fiber G-Shock he’s had for seven years.

Dayrit is the kind of guy who sees something he wants and moves forward. Tradisyon opened in March 2020, a week before lockdown. “You can’t really Google ‘what to do in your first pandemic,'” he says. Or at least, back then you couldn’t. “Most new restaurants, you figure out dine-in, you work out all the kinks, and that’s when you do delivery. We had to do delivery first, and we had to figure it all out in a day.” He shrugs. “It was tough, but I was like, we’re here, we might as well make this happen.”

More than two years later, it is still happening. Tradisyon, which he owns along with several partners, reflects his self-assured unfussiness. There are few tables outside, inside, the exposed brick wall painted white and some wicker hanging lamps provide all the atmosphere, and it’s plenty. My yellowtail collar is insanely good. My can of seltzer is served with a paper cup. The service is quick and easygoing and nothing is a big deal except the food – with complete sincerity, I tell you I regret every meal I ate out in New York following this one, except the time I came back and got the squid adobo.

Speaking of which, at one point while I’m there, a customer in his 60s who seems like he might live in the neighborhood comes in by himself and doesn’t even need to look at the menu. “I know what I want,” he says. “I want the squid adobo.” I tell Dayrit that the man’s decisiveness with his lunch reminds me of how Dayrit collects watches. This resonates with him. “If there’s a watch I want, and I see one in pristine condition, I drop everything.”

A table of women order the beef stew, called caldereta. It’s beef stew and tomato sauce, onions, garlic, bell peppers, tomatoes, and beef short ribs. It has olives in it. “It’s very, very Spanish. But what Filipinos did was add cheese and soy sauce, too. And put it on top of rice, it’s just amazing.” He giggles thinking of how good it is. The women agree.

On the one hand, it’s an ordinary Thursday here at Tradisyon. On the other hand, it’s a big day, because Dayrit is selling his 1956 Datejust and getting a Submariner. “I can’t wear this watch in the kitchen,” he says of his Datejust. “I’m partly getting this Submariner to celebrate that we’re opening a second location, but I’m also getting it, and getting rid of the Datejust, to acknowledge that at the end of the day, with how much I work, I’m really a Submariner guy.”

“I actually had a really, really beautiful 1675 Pepsi GMT. But I wasn’t really in love with it. But then I saw this. I’ve never seen a 1680 in this condition, ever. So I sold my GMT and got the cash and purchased this. Because my rule of thumb is if I want to buy something, I have to get rid of one. Because I’ll buy, I’ll buy, I’ll buy, I’ll buy. Before you know it, I have 25 watches with two wrists. You know what I mean?

“This one was from a friend of mine, a watch dealer based in Miami. He was like, ‘Anton, I got an offer for you.’ I said, ‘I like this. It was beautiful, it’s perfect. I want that right now.’ He was like, ‘Sure. If you want to buy right now, I’ll save it for you and I will give it to you for this price.’ And he gave me a price that was very attractive, so I had to get it. At that time, I didn’t have a Sub. I mean, I had had Subs. But at that time, the beginning of this summer, I didn’t have a Sub. I had GMTs. But I was doing a lot of cooking demos and cooking videos and stuff like that. I said to myself,  ‘Hey, I need a robust watch that looks really good that on TV. Yes. I need something like this. I need a watch that can handle being dipped in froth.'”

“I have this gold Datejust that I like, but I’m getting rid of it to get this Submariner, partly to celebrate the opening of my second location for Tradisyon. But also because this watch is so durable and robust. I can wear this watch and not worry about anything. It’s one thing to have really cool, good-looking watches like the Datejust, but you can always wear the Submariner. Look, I was first a GMT guy. GMTs, Datejusts they’re beautiful watches. Thin, great aesthetically. But I only end up wearing them at home or going to store and that’s it. Eventually, I’ve veered back to owning Subs unconsciously because of my lifestyle. I’m just a Submariner guy.”

“I’ve had this for six years. I purchased this when I opened the second location of Mighty Bowl. You wouldn’t suspect that it’s only $1,000. It is really sweet. It’s 1,000 bucks! I mean, what a deal. Hell yeah. It came with a band. I love these hands, which are called sword hands, which are also used on a lot of Omega watches. I bought a bracelet, a beads of rice bracelet, and put in on myself. I chose the beads of rice because in the kitchen it gets hot, your wrist breathes better in the beads of rice. I like Hamilton because I’m always for the underdog. I think they’re one of the most beautiful watches for the value that you can get. At the end of the day, the movement used in this is actually based on the Daytona movement. But those can be $200,000 to $300,000, and this was $1,000.”

“I went through maybe five G-Shocks when I was a cook. The battery runs out and I just buy a new one. I never really get around to getting the battery changed. Because how much are they? They’re very affordable, even on a cook’s salary. I finally got this. This is the last G-Shock that I ever bought. And it just lasted because, first of all, it’s carbon fiber. Number two, it’s solar, so you don’t need a battery. This is the first watch that I bought when I started being a chef. When I graduated from becoming a cook and because a a sous chef, I got this to mark the occasion. Seven years ago. I remember buying it. Because G-Shocks at that time were 100 bucks to 200 bucks, something like that. This one actually cost $450. I was like, ‘Okay, that’s kind of high, but I’m a chef now.’  I bought this one at the Casio place in Soho. Actually, this watch saved my career many times. I am not kidding. Pretty much I have undiagnosed ADD. I will leave stuff in the oven, and forget about it in two minutes. Not anymore. Put the timer, on, bam. I always remember.”

“I cannot live without this apron. It’s pretty dirty, but I wanted it to be seen as used. It’s made by an Argentinian guy who had a store in Barcelona, they moved to the countryside, but they’re still making them. I have several of them; I got my first one in 2016. I was about to open the first Mighty Bowl. My wife and I were on our honeymoon and I saw this leather shop, and a really cool apron in the window. And then I stepped inside, the guy who owned the spot was just there by himself. I shook his hand. I bought my first one for like $200. This is a lot for an apron. I bought one and then I opened the first restaurant, used it, and did not ever take it off. It was so comfortable.

“I love the attention to detail. It doesn’t stress your back. You can take off the straps if you want to wash it. Those details make it unique. I also like wearing this because it makes me feel the part. It’s the same with watches. I have a little bit more confidence in what I’m doing when I wear this apron – or wear my watches.” 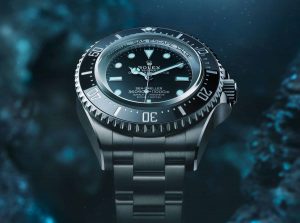 In a surprising move this morning Rolex, along with filmmaker/adventurer extraordinaire James Cameron, revealed a new Deepsea Challenge in the reference 126067. Rolex enthusiasts will immediately notice something new about…

END_OF_DOCUMENT_TOKEN_TO_BE_REPLACED 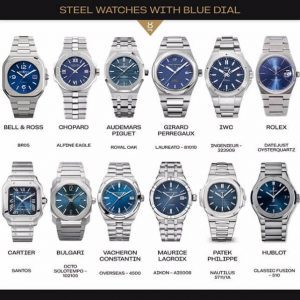 While GaryG thinks it’s all the more impressive that designers continue to delight us with new looks, many watches are often very similar. And trying to describe the slippery slope…

END_OF_DOCUMENT_TOKEN_TO_BE_REPLACED Big brands are now making beautiful, reliable, and relatively accurate “traditional” mechanical watches, but the handcrafted work many of us value is disappearing. Highly skilled watchmakers and artisans are rare…

END_OF_DOCUMENT_TOKEN_TO_BE_REPLACED

The Portugieser collection is a pillar of IWC Schaffhausen, and for a good reason. The collection dates back to the 1930s when two gentlemen dealers from Portugal commissioned a watch…