Greetings from Cupertino! I’m writing this from the Steve Jobs Theater in Apple Park, where Apple just wrapped up its annual keynote presentation presenting all of its latest and greatest goodies and gadgets, including the iPhone 14 and three – count ’em, three – new types of Apple Watch. It’s the largest and most comprehensive update to the top-of-the-line smartwatch yet.

Today’s headlining news is the introduction of Apple Watch Ultra, a brand-spanking-new platform for Apple Watch that ratchets up the smartwatch’s already impressive sport and activity tracking capabilities. It includes upgrades such as Apple Watch’s brightest display screen yet for legibility in intense sunlight, water resistance up to 100 meters with extended dive capabilities certified by EN 13319 (the international standard for dive computers), temperature resistance in extreme conditions (between -4° F and 131° F), and an 86-decibel siren that can be activated and heard up to 600 feet away in emergency situations. Apple Watch Ultra features a redesigned case profile made of aerospace-grade titanium, as well as a flat sapphire crystal with an extra-large 49mm diameter.

Outside of the size, one of the most significant upgrades here is the presence of a three-dimensional flank on the right side of the case that houses an extra-large “Digital Crown” and side control button. The new Digital Crown has a larger diameter and deeper grooves than any previous crown, to ensure ease of use when wearing gloves. On the left side of the case, there’s a new customizable “Action Button” in high-contrast orange that allows you to enable a more precise starting time for your workout as well as instant transition between different parts of a race or workout.

(In my opinion, the new flank causes Apple Watch Ultra to bear a slight resemblance to the case design of the Patek Philippe Nautilus, which thanks to Ben’s 2018 interview with Jony Ive, we know is a favorite of Apple’s former Chief Design Officer.)

Other updates on Apple Watch Ultra, compared to a standard Apple Watch, include the addition of a second speaker for increased volume, the biggest battery life yet for Apple Watch with 36 hours of running autonomy on a single charge, plus 60 hours of possible extended battery life utilizing a battery optimization setting that Apple says it will announce later this fall. Sixty hours, it’s worth noting, is enough time to complete an entire long-distance triathlon with GPS tracking turned on. Speaking of, the GPS performance has been reworked and updated with a new precision dual-signal link that connects to a combination of L1 and L5 signals. Apple says it’s the most accurate GPS tracking system in a smartwatch on the market today.

The compass application has been completely upgraded, with the ability to add waypoints that will help you retrace your steps in case you get lost. The updated compass application also plays a big role in the release of a brand-new Apple Watch face called “Wayfinder,” which (in my book) somewhat resembles the dial of a Breitling Navitimer and incorporates the compass on the dial of the watch (in addition to seven other “complications”) and can be customized for whatever mountain, trail, or ocean you find yourself on or in. There’s even a Night Mode that turns the face red for better visibility in the dark.

I think the new diving capabilities will be particularly interesting for traditional sport-watch lovers, as Apple Watch Ultra can effectively replace a conventional dive computer on shorter dives, with capabilities such as depth tracking, decompression measurement, a notification for excessive ascent rate, physical dive entry and exit tracking via GPS, and connectivity to a new iPhone app called “Oceanic+” that allows you to plan your perfect dive. I’ll repeat – Apple Watch Ultra is certified to the EN 13319 international standard for dive computers. How’s that for a tool watch?

Apple is also introducing three different band types for Apple Watch Ultra that are tied to specific, individual outdoor activities, including the Alpine Loop, which features a titanium “g-hook” and reinforced top loops; the Ocean Band, which is made of high-performance elastomer that can fit over a wetsuit; and the lightweight Trail Loop, the thinnest Apple Watch band yet.

Apple emphasized in the keynote presentation the amount of time Apple Watch Ultra took to develop, which involved them working closely with serious athletes and explorers such as diver Nadia Aly and runner Scott Jurek. The final product even satisfies MIL-STD-810, a United States general-purpose military standard that highlights the quality and durability of Apple Watch Ultra. It will cost $799, can be ordered via Apple today, and will be available everywhere on September 23, 2022.

In addition to Apple Watch Ultra, there’s also a new mainline smartwatch addition at Apple, with the announcement of Apple Watch Series 8. Building on the past seven Apple Watch releases, Apple Watch Series 8 introduces a new Low-Power Mode that offers up to 36 hours of battery life on a single charge; crash detection via the addition of two new motion sensors, a three-axis gyroscope, and an upgraded accelerometer; and a new temperature sensor that’s been optimized for women’s health tracking and family planning.

Similar to iPhone’s power-saving setting, Low Power Mode on Apple Watch Series 8 turns off certain capabilities such as the always-on display in order to maintain a high level of juice for an extended period. Apple Watch Series 8 normally offers an all-day 18-hour battery life – same as Series 7 – but it extends to 36 hours when Low Power Mode is turned on. Activity tracking and fall detection remain available during this power-saving setting. Low Power Mode will be available on all Apple Watch models after Series 4 that are running the all-new watchOS 9 operating system.

The new crash detection safety feature on Apple Watch Series 8 is built around the addition of two new motion sensors, a three-axis gyroscope, and an updated accelerometer that can measure g-force caused by a crash up to 256 gs. It will detect car and bike crashes and notify your emergency contacts 10 seconds after an impact is detected. The addition of a temperature sensor on Apple Watch Series 8 focuses on women’s health, with the addition of retrospective ovulation estimates for healthy living and family planning. One temperature sensor is placed on the caseback, underneath the back crystal, and another sensor is placed underneath the front-facing crystal. When sleeping, the sensors track nightly shifts in wrist temperature and can notify the wearer when an abnormal temperature occurs. In combination with Apple Watch’s heart-rate tracking capability, it will provide an estimate of a completed ovulation cycle. As always with Apple, privacy is of the utmost importance, and health data such as retrospective ovulation estimates are end-to-end encrypted on the device and only accessible by the individual.

Apple Watch Series 8 is available in four colors of recycled aluminum – midnight, starlight, (PRODUCT)RED, and silver – and three colors in stainless steel (silver, gold, and graphite). There are a multitude of new bands available, including from the Nike and Hermès partnerships. Apple Watch Series 8 can be ordered today for $399 with GPS capability and $499 with GPS+Cellular capability; delivery start September 16, 2022.

The new Apple Watch SE features a new caseback made out of a nylon composite with the outer case constructed of recycled aluminum in three different color options (midnight, starlight, and graphite). Pricing starts at $249 for the second-gen Apple Watch SE with GPS connectivity and $299 for the combination of GPS and cellular. Similar to Apple Watch Series 8, you can order the watch today and delivery will begin on September 16, 2022.

The HODINKEE Shop is an Authorized Retailer of Apple Watch; explore our collection here.

We often get asked all sorts of questions about various famous watch brands. In an effort to help answer these questions, we compiled a list of 18 of the most…

END_OF_DOCUMENT_TOKEN_TO_BE_REPLACED 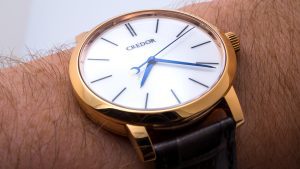 As a ‘90s kid whose childhood consisted largely of anime and “Gran Turismo,” the letters JDM are a rapid-release switch for the dopamine center of my brain. JDM, AKA “Japanese…

END_OF_DOCUMENT_TOKEN_TO_BE_REPLACED When Joshua Munchow first saw the Greubel Forsey Tourbillon 24 Secondes Architecture, he was surprised. But now, in the full context of everything happening with the brand, his main reaction…

END_OF_DOCUMENT_TOKEN_TO_BE_REPLACED 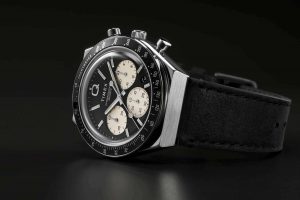 I’m sure I’ve mentioned this before, but there are times when I’ll see a press release for a new watch and swear to myself that it already exists, and some…

END_OF_DOCUMENT_TOKEN_TO_BE_REPLACED Halloween, a word contracted from “All Hallow’s Eve,” is a predominately American celebration whose traditions come from late nineteenth-century Celtic origins. And along comes a modern mechanical time-telling spider in…

END_OF_DOCUMENT_TOKEN_TO_BE_REPLACED 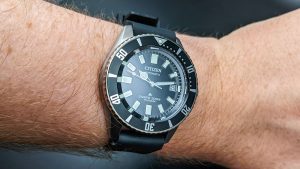 When Citizen first announced the Promaster Mechanical Diver 200m back in spring 2022, the Japanese giant’s messaging was largely centered around this model’s ancestor — a 1977 Citizen Challenge Diver…