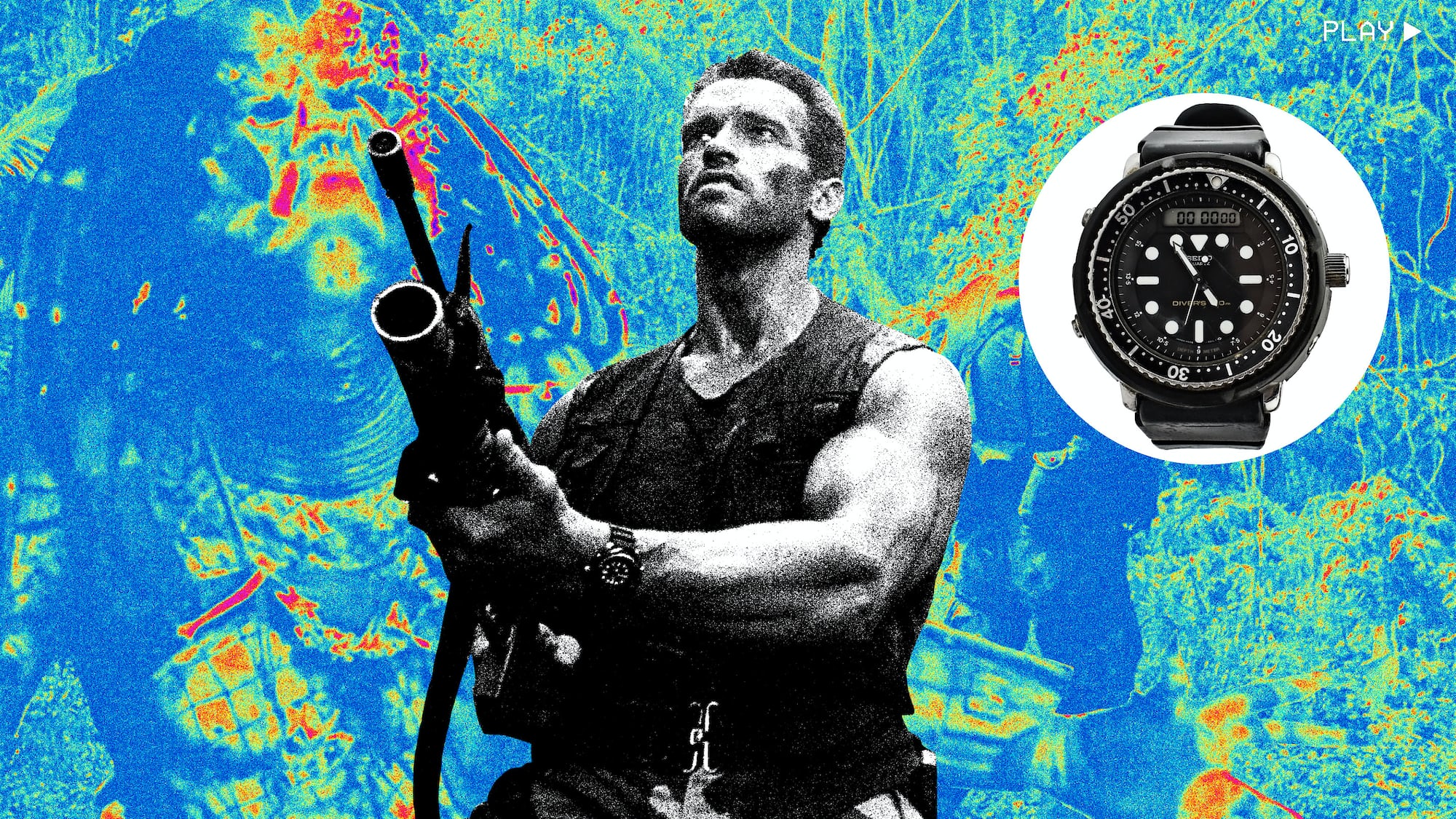 Here’s a recipe for getting a movie greenlit in the 1980s: Cast Arnold Schwarzenegger. Hand him a weapon. Promise explosions, shots of his muscles, and a bevy of pithy one-liners. You’ve got yourself a hit.

The formula originated with James Cameron’s Terminator (1984), though you could look back even further to Schwarzenegger’s time as Conan (the barbarian, not the late-night talk show host), just without the guns – though technically even that still has “guns” if you think about it.

In 1987, Schwarzenegger was in his prime when he took the role of Dutch in John McTiernan’s Predator. The movie follows a group of mercenaries on a rescue mission turned covert CIA operation in the jungle of an unnamed Central American nation. They discover they’re being tracked as prey by a seemingly invisible force of nature – the Predator. One by one, the slimy, masked, otherworldly being takes out Dutch’s crew until he finds himself tangled in a solo face-off. For the whole film, Schwarzenegger wears the burly Seiko watch which has since taken his name.

This month saw the release of Prey on Hulu. It’s a prequel film set in the broader Predator universe that’s directed by Dan Trachtenberg of 10 Cloverfield Lane (2016) fame. Prey takes place 300 years ago, in the Great Plains and follows a young Comanche warrior named Naru (played by Amber Midthunder) who – like Schwarzenegger, some 200-odd years later – finds herself in a game of hide and seek with a fierce alien being out for human blood.

There’s not much to spot in Prey, as there were no wristwatches that I’m aware of in the Comanche nation circa 1720-something (would love to be proven wrong). The 1987 film, on the other hand, features one of the most cinematically important watches in modern times: The Seiko H558 (likely the H558-5009), an ana/digi watch that subsequently became known as the “Arnie.”

The H558-5009 was part of Seiko’s early ’80s output. I wouldn’t go so far as to call it a popular watch in its day, but it’s certainly one of the most specific watches of its time. It was so big and aggressive that it was almost destined to land on Schwarzenegger’s wrist. In addition to Predator, he’s also known for wearing it in 1985’s classic Commando.

Playing off the nostalgia for this watch and the cult status it accumulated over the years, Seiko somewhat revived the H558-5009 in 2019. It called the new watch, now known as the SNJ025, a “Modern Interpretation of the 1982 Hybrid Diver’s Watch.” Our own James Stacey delivered a stellar Hands-On review of that one at the time. Key features of the original and the revival are the 47.8mm case in the known Seiko Tuna styling, the rotating dive-time bezel, and the digital LCD readout. The pseudo-re-edition is a Solar model.

In Predator, Schwarzenegger’s Dutch wears this watch constantly. It fits his pulsating muscles and honestly looks sort of small on his wrist. Speaking of wrists, there’s a key wrist shot in the film that doesn’t feature any watches. Early on, while being briefed on his mission, Dutch runs into his old friend, a CIA operative, Dillon (played by Creed himself, Carl Weathers). The two engage in a handshake turned arm-wrestling match where the camera settles on their wrists and (HUGE) biceps, resulting in a piece of cinematography that’s picture-perfect for the era.

In terms of character fit, the H558-5009 screams “mercenary watch” to me. It’s accurate, legible, and with its 150m of water resistance, able to withstand anything thrown at it – up to, and including, extraterrestrials with blood made from Super-LumiNova.

There’s no better opening to a film than one where the watch kicks things off. And this one is iconic both for both Arnie and the “Arnie.” A helicopter lands on a seemingly remote beach. A group of mercenaries make their way off. Through the darkness, we see the distinct silhouette of Schwarzenegger’s Dutch, hat on his head, puffing out smoke from his cigar while remaining seated inside the helicopter. He then makes his way off, as well, and takes a short car ride to a nearby military installation. As he gets out of the car, still smoking, he takes off his aviator sunglasses [00:03:35] and we see the Seiko Arnie on his massive wrists.

Later, as the game of Predator and prey is in full swing, Dutch finds himself face to face with the monster while also trying to protect Anna (played by Elpidia Carrillo), whom his team rescued after their initial covert mission. Dutch unleashes a torrent of gunfire at the Predator and takes a hit himself, but not before we get a solid profile shot of the ana/digi Seiko. As he falls to the ground [01:16:09], we hear him shout the now-iconic line to Anna, “Get to the choppa!” And, scene.

Predator (starring Arnold Schwarzenegger) is directed by John McTiernen with props by Antonio Mata. It is available to stream on Hulu and to rent or buy on iTunes and Amazon.

HODINKEE is an Authorized Retailer of Seiko watches. You can check out our collection here. For more information about Seiko, visit their website.

Today we’ll review just the kind of watch that can make life easier for a jet setter such as yourself.

END_OF_DOCUMENT_TOKEN_TO_BE_REPLACED For the two new 2022 models in the Classique Calendrier Reference 7337 collection, one in pink gold and the other one in white gold, Breguet opted for a blue background…

END_OF_DOCUMENT_TOKEN_TO_BE_REPLACED 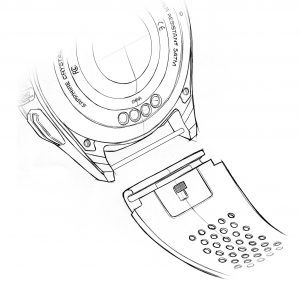 Editor’s Note: This is part of a new series of editorial columns by our senior editorial staff. Every Monday morning, aBlogtoWatch aims to bring you a more personal, eclectic kind…

END_OF_DOCUMENT_TOKEN_TO_BE_REPLACED 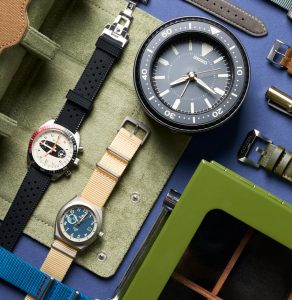 Winter is coming! Ok….not really but the end of summer is near. We here at the Windup Watch Shop are putting away our shorts and sandals and are bringing out…

END_OF_DOCUMENT_TOKEN_TO_BE_REPLACED

It’s the final countdown for the TAG Heuer Monaco Calibre 12 Chronograph. This is the Final Edition so let’s review this watch in-depth before it’s too late.

END_OF_DOCUMENT_TOKEN_TO_BE_REPLACED And….we’re back with episode 8 of A Week in Watches! On this week’s episode we go over 5th-anniversary launch from Ming, some small but mighty watches by Christopher Ward, and…